Package xrt (XRayTracer) is a python software library for ray tracing and wave propagation in x-ray regime. It is primarily meant for modeling synchrotron sources, beamlines and beamline elements. Includes a GUI for creating a beamline and interactively viewing it in 3D.

The main interface to xrt is through a python script. Many examples of such scripts can be found in the supplied folder ‘examples’. The script imports the modules of xrt, instantiates beamline parts, such as synchrotron or geometric sources, various optical elements, apertures and screens, specifies required materials for reflection, refraction or diffraction, defines plots and sets job parameters.

The Qt tool xrtQook takes these ingredients and prepares a ready to use script that can be run within the tool itself or in an external Python context. xrtQook features a parallelly updated help panel that provides a complete list of parameters for the used classes, also including those from the parental classes. xrtQook writes/reads the recipes of beamlines into/from xml files.

In the present version, xrtQook does not provide automated generation of scans and does not create wave propagation sequences. For these two tasks, the corresponding script parts have to be written manually based on the supplied examples and the present documentation.

See a brief tutorial for xrtQook. 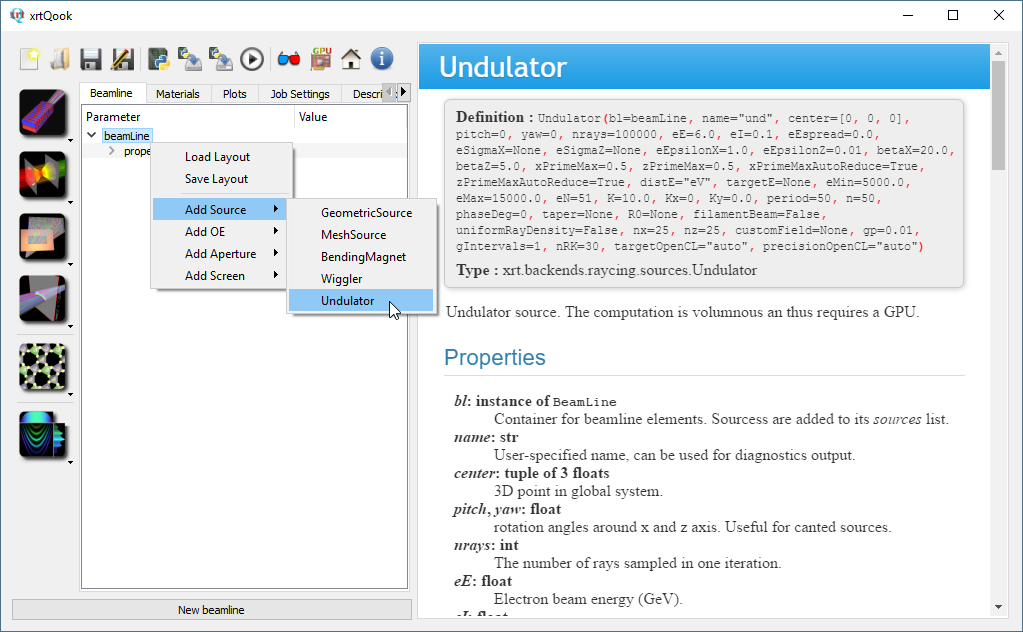 The beamline created in xrtQook can be interactively viewed in an OpenGL based widget xrtGlow. It visualizes beams, footprints, surfaces, apertures and screens. The brightness represents intensity and the color represents an auxiliary user-selected distribution, typically energy. A virtual screen can be put at any position and dragged by mouse with simultaneous observation of the beam distribution on it. See two example screenshots below (click to expand and read the captions).

The primary purpose of xrtGlow is to demonstrate the alignment correctness given the fact that xrtQook can automatically calculate several positional and angular parameters.

The code should run in both Python branches without any modification, although compatibility with Python 2 is not checked any longer.

numpy, scipy and matplotlib are required. If you use OpenCL for calculations on GPU or CPU, you need AMD/NVIDIA drivers, Intel CPU only OpenCL runtime (these are search key words), pytools and pyopencl. PyQt4 or PyQt5 are needed for xrtQook. Spyder (as library of Spyder IDE) is highly recommended for nicer view of xrtQook. OpenGL is required for xrtGlow.

xrt is available as source distribution from pypi.python.org and from GitHub. The distribution archive also includes tests and examples. The complete documentation is available online at Read the Docs and offline as zip file at GitHub.

Unzip the .zip file into a suitable directory and use sys.path.append(path-to-xrt) in your script. You can also install xrt to the standard location by running python setup.py install from the directory where you have unzipped the archive, which is less convenient if you try different versions of xrt and/or different versions of python. Note that python-64-bit is by ~20% faster than the 32-bit version (tested with WinPython). Also consider Speed tests for making choice between Windows and Linux and between Python 2 and Python 3.

For getting help and/or reporting a bug please use GitHub xrt Issues.